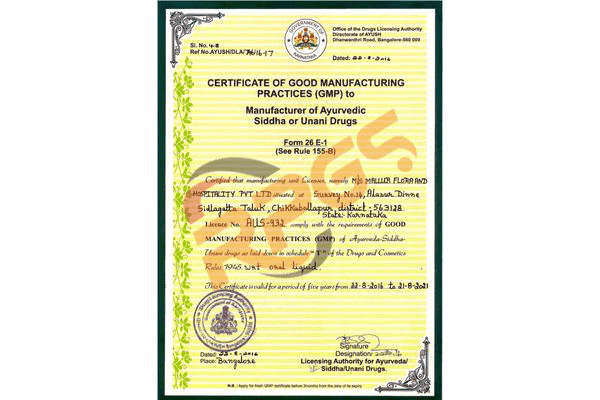 The Drug Licensing Authority (DLA) was established in the year 1973. It deals with licensing of Ayurveda Siddha & Unani drugs and cosmetics. In the beginning, DLA had appointed two Drug Inspectors in the Directorate of Indian systems of medicine, Bengaluru.

The Director/Commissioner AYUSH is notified as Controlling Authority. For the rules & regulations of chapter IV-A of the Drug and Cosmetics Act 1940.The Commissioner of AYUSH has direct control over both the Enforcement Wing and the Testing Wing.

Contact RPGS Associates to process your AYUSH License or AYUSH Certification. Apart from Licenses for Manufacturing units, we also help you with Loan facilities.Enforcement wing deals with the licensing of Ayurveda, Siddha & Unani drugs and cosmetics, inspections of manufacturing establishments and drawl of samples for test and analysis, investigation of complaints, launching of prosecution against the defaulters, etc.

Following are the manufacturing licenses that are issued by AYUSH:

It is obtained within the cases when the applicant is desirous of obtaining the license has planned for manufacturing and marketing, both of the products. during this case, the manufacturer has got to found out his own manufacturing unit.

The state requirement for such manufacturing found out varies from state to state. One has got to suits all the wants stated by the state authority of AYUSH.

Prerequisite of AYUSH Manufacturing license in Bangalore to be obtained under AYUSH Act:

In this quite found out the manufacturing unit isn't owned by the applicant. The products are manufactured by the third party manufacturers. Such Loan license is to use with a GMP certified manufacturer and thereafter it'll be issued to the applicant company. Thereafter the merchandise approval is required to be obtained from the authorities.

Prerequisite of AYUSH Loan license to be obtained under AYUSH Act:

In such arrangements neither the person has the license nor has the manufacturing set of his own, only the marketing part is completed by the contract / third – hand manufacturing, therein case, all compliance and liaison work shall be taken care by the manufacturer.

However, you'll provide the raw materials and packaging material or manufacturer can arrange it from his own sources.